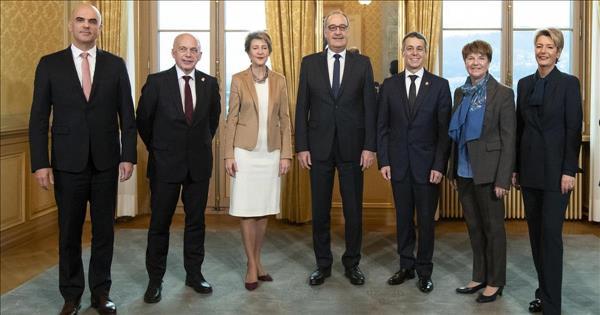 Why the Swiss government system is (not) ready for reform

(MENAFN- Swissinfo) The president of the Greens – main winner of the legislative elections in October – is trying to win a seat in the Swiss government. Should we let Regula Rytz’s ambition lead to the overthrow of the traditional political composition of the seven members of the executive?

Rytz’s chances of snatching a seat from one of the incumbents are slim, despite weeks of preparation for Wednesday’s election in both houses of parliament. The political right and the center argue that it is too early for the Greens to be rewarded with a seat to the detriment of the center-right Radical Party.

Under a 60-year-old agreement between the main political parties, the government – also known as the Federal Council – is made up of representatives from the four most powerful groups in parliament.

In 1959, the four main political parties agreed on the distribution of the seven ministerial seats. Two seats each for the Radicals, the Christian Democrats and the Social Democrats. The People’s Party won a seat.

This system was supposed to represent all the major political parties according to their share of the vote and oblige them to cooperate for the good of the country and the people.

The original “magic formula” remained in place until 2003, when the People’s Party reached the top. Following repeated electoral victories, the right-wing party won a second seat at the expense of the Christian Democrats.

Experts disagree on whether the Swiss political system reached another turning point in 2019, when the formula needs further reform. The proposals include the participation of the Greens or / and the increase in the number of government ministers.

But political scientist Michael Hermann of the Sotomo Research Institute said it was time to adapt the informal “magic formula” that determines the makeup of the cabinet.

(Keystone / Martin Ruetschi) swissinfo.ch: Is Regula Rytz, President of the Greens, right to claim a seat in the multi-party government?

Michael Hermann: Absolutely. There are perfectly good reasons for his candidacy, whether it be the increase in the share of Green votes in the House of Representatives elections or the number of seats in the Senate. So far, the Greens have been told that they are just an important group in the House.

swissinfo.ch: Who should give way to the Greens in government?

MH: The situation is most embarrassing for the two right-wing parties of the center, namely the radicals and the Swiss People’s Party. They are well below the majority in parliamentary chambers, but they each have two seats, that is, the majority in the seven-member cabinet.

swissinfo.ch: Rytz is targeting a headquarters belonging to the radicals. Which of their two ministers is most at risk?

MH: It is clearly the Minister of Foreign Affairs Ignazio Cassis. His party colleague, Karin Keller-Sutter, is more popular and seems to have a strong position in the cabinet. However, Cassis is somewhat protected by its status as a representative of the country’s Italian-speaking minority region.

swissinfo.ch: Do the Greens have the right to a seat in government if the argument is that the composition of the cabinet must reflect the will of the voters?

MH: That is correct if we only consider the results of the legislative elections in October. Yet the so-called “magic formula” is not a strict mathematical equation. There are other things to consider.

Regula Rytz hopes to win a seat for the Green Party.

(© Keystone / Peter Klaunzer) swissinfo.ch: How are young voters supposed to understand such a system. They supported the Greens and their environmental policy?

MH: The Greens and environmentally conscious parties will have a strong position in parliament over the next four years and they are keen to push their demands forward. This ambition clashes with the traditional thought of maintaining power.

Switzerland still has a very stable political system, but it has become more fluid. Many voters might choose politics right now because of a current issue, but support the political left or the Greens next time around.

swissinfo.ch: Representatives of established parties argue that it goes against Swiss political traditions to oust an outgoing minister. Why?

MH: You should stay away from politics if you are afraid of being rejected. I believe that a cabinet position should not be defined by someone’s personal career plans. It must be possible that they come to an abrupt and early end.

The Federal Council has seven seats, but how does Switzerland calculate to reach this number?

Legal warning: MENAFN provides the information “as is” without warranty of any kind. We accept no responsibility for the accuracy, content, images, videos, licenses, completeness, legality or reliability of the information contained in this article. If you have any complaints or copyright issues related to this item, please contact the supplier above.