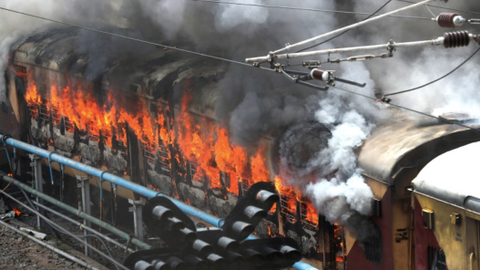 At least one person has been killed during protests against a new military hiring process that aims to recruit recruits aged 17½ to 21 for four-year terms in non-commissioned ranks.

At least one protester has been killed in the southern Indian city of Secunderabad, with protests against a new military recruitment process that have spread across the country.

Authorities on Friday imposed restrictions on gatherings in a satellite city of the Indian capital, which houses the offices of several multinational companies, to prevent protests.

The Gurugram district administration, south of New Delhi, said a maximum of four people could congregate in one place.

Some of the world’s largest companies have offices in Gurugram including Microsoft Corp, Meta and Google Inc. It is also home to manufacturing facilities of major Indian companies like Maruti Suzuki.

In at least three states, protests turned violent as thousands of young men took to the streets.

In the northern state of Uttar Pradesh, protests erupted in 14 districts and police fired into the air to repel rock-throwing crowds, a senior police official said. Prashant Kumar.

And hundreds of people gathered in the town of Secunderabad in southern Telangana state, clashing with police and burning station property, authorities said.

According to Indian media, one person died there and 15 were injured amid reports of violence and arson.

The scheme aims to recruit more people into the military on short four-year contracts to lower the average age of the 1.38 million men in India’s armed forces and cut booming retirement costs.

But many would-be recruits oppose it, worried about job opportunities after serving their four-year term and disappointed to miss out on a pension.

The new recruitment system has also drawn criticism from opposition parties, and even some members of Modi’s ruling Bharatiya Janata Party, who say it will lead to higher unemployment in a country struggling with joblessness.

The government has said the armed forces aim to recruit around 46,000 people under the new system this year and will only retain 25% at the end of their four-year term.