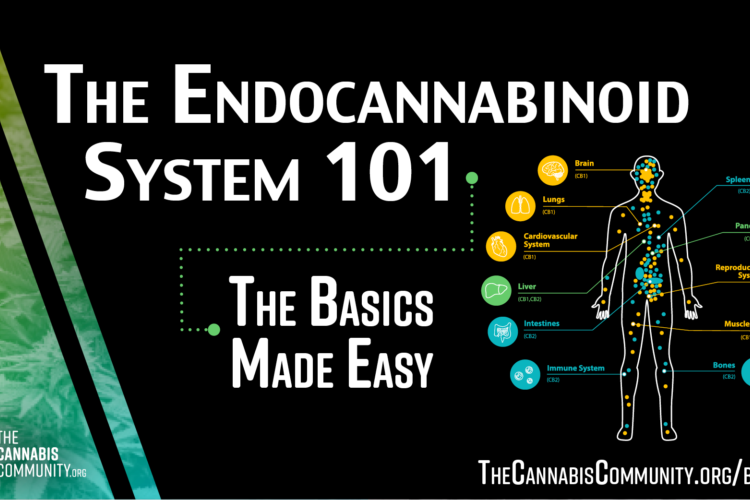 This article was originally published on The cannabis community and appears here with permission.

The discovery of the endocannabinoid system (ECS) and its effects on the human body has found itself in the spotlight of top research institutions and medical journals. Find out how it works and how cannabis use affects it.

The endocannabinoid system is a complex cell signaling system in the brain and body that interacts with other body systems. In 1992, when scientists were researching the effects of cannabis use, it was discovered that THC (tetrahydrocannabinol), a compound found in cannabis, could bind to cell receptors. Even if you don’t use cannabis, the ECS is active in your body.

Research has linked ECS to the following processes:

All of these functions help maintain homeostasis, or the stability of your internal environment. When an external cause interrupts your body’s homeostasis, such as pain from an accident or a fever, the ECS steps in to help your body return to its normal state. Experts now believe that the main function of the ECS is to preserve homeostasis.

The endocannabinoid system is made up of

AEA is involved in the brain’s creation of motivation and pleasure, as well as in the regulation of eating behavior.

2-AG plays a role in a variety of (patho)physiological processes, including emotion, cognition, energy balance, pain perception and neuroinflammation.

Both molecules are produced in the body and can be found in the brain and blood, and modulate many body functions. They are released in response to stress and are involved in a variety of biological processes, including mood and appetite regulation. Endocannabinoids are also released in response to pain. They attach to cannabinoid receptors, which are found on the surface of cells.

Cannabinoid receptors have two main types: CB1 is mainly found in the neurological system, connective tissues, gonads, glands and organs, while CB2 is found primarily in the immune system and its associated components.

Endocannabinoids have the ability to connect to both receptors, signaling the ECS that it’s time to act. Effects are determined by the location of the receptor and the endocannabinoid it binds to.

Endocannabinoids, for example, may reduce pain by targeting CB1 receptors in the spinal nerve. Others can connect to a CB2 receptor in your immune cells to signal inflammation, which is a typical symptom of autoimmune diseases.

Once the endocannabinoids have done their job, the enzymes are responsible for breaking them down.

This is due to two enzymes in particular: fatty acids amide hydrolase breaks down AEA. Monoacylglycerol acid lipase is a digestive enzyme that breaks down 2-AG.

How are endocannabinoids made and released in the body?

Endocannabinoids are naturally produced by the human body. They can be found in a variety of organs and tissues, including muscle, brain, and circulation cells. When endocannabinoids attach to a cannabinoid receptor, they become active. Receptors are located throughout the body.

The specific physiological process that promotes or stimulates the binding of endocannabinoid receptors is still being researched. However, researchers believe that when a biological system is out of balance, receptors attach to cannabinoids to help repair the problem.

The endocannabinoid system works in a precise way. The ECS, for example, controls body temperature when it is outside the usual range without affecting other processes. To avoid over-correcting the condition, enzymes break down the cannabinoids once the ECS has restored balance to the body.

What is the relationship between THC and ECS?

One of the most common cannabinoids found in cannabis is tetrahydrocannabinol (THC). It’s the chemical that gets you high.

THC, like endocannabinoids, interacts with your ECS by attaching to receptors once in your body. Its potency stems from its ability to bind to CB1 and CB2 receptors.

This allows THC to have a variety of physiological and psychological effects, some of which are more favorable than others. THC, for example, can help relieve pain and stimulate hunger. However, in some situations, it can lead to paranoia and worry.

Experts are currently studying how to create synthetic THC cannabinoids that interact with the ECS in a positive way.

What is the relationship between CBD and ECS?

Cannabidiol (CBD) is the other primary cannabinoid contained in the cannabis plant. CBD, unlike THC, does not get you “high” and generally has no harmful side effects.

The interaction of CBD with the ECS is unknown to experts. They know, however, that it does not bind to CB1 or CB2 receptors in the same way as THC.

Although the specific mechanism of action of CBD is uncertain, there is evidence that it can relieve pain, nausea, and other symptoms related to various illnesses.

The ECS is essential to the stability of your internal processes. However, there are still many things we don’t know. As scientists gain more insight into the ECS, it may one day hold the key to curing a variety of ailments.