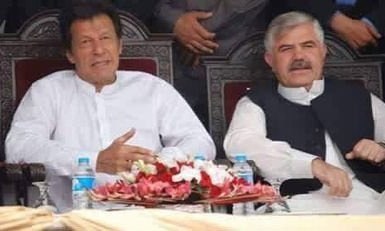 PESHAWAR: In a major policy shift, the Pakistani provincial government of Tehreek-i-Insaf decided to abolish the district government, the most efficient level of the existing local government system.

The decision in this regard was taken at a meeting chaired by Prime Minister Imran Khan during his inaugural visit to Peshawar on Friday. Also in attendance were Chief Minister Mahmood Khan, cabinet members, MPs and MPAs.

When asked who would be the administrative head of the 20 devolved departments currently run by the district Nazim, Mr Tarakai said a threadbare discussion would be held to sort out these issues. However, he said, those powers would be devolved more to tehsil and village and neighborhood councils as needed.

He said some powers of devolved ministries would be retained by the provincial government.

Regarding the legislation to make the proposed changes in the LG system, he said it was not yet clear whether the government would make a new law or introduce amendments to the existing KP Local Government Law, 2013.

The minister was not clear on the completion of the mandate of the existing three-tier local governments, which is expected to be completed by the end of May 2019. The district government would not be abolished anytime soon as the consultation on the changes in the LG system would take three to four months.

Another big change in the system was that the mayor of tehsil would be elected directly by the masses while under the existing system tehsil councilors elected the nazim tehsil.

Reacting to the decision to abolish the district level of government, Association of Local Councils (LCA) Senior Vice President Sahibzada Fasihullah told Dawn it was a violation of Article 140 -A of the Constitution.

Mr Fasihullah, who is also the Upper Dir District Nazim, said the bureaucracy appeared to have succeeded in abolishing district governments and retaining ultimate powers in the district.

In the absence of the district Nazis, bureaucrats would benefit from the power to run districts instead of elected officials, he said.

“The LCA will oppose the abolition of the district government in all forums,” he said and added that they would also go to court from the LCA platform against this decision. He also warned to launch a protest campaign if the government did not withdraw its decision.