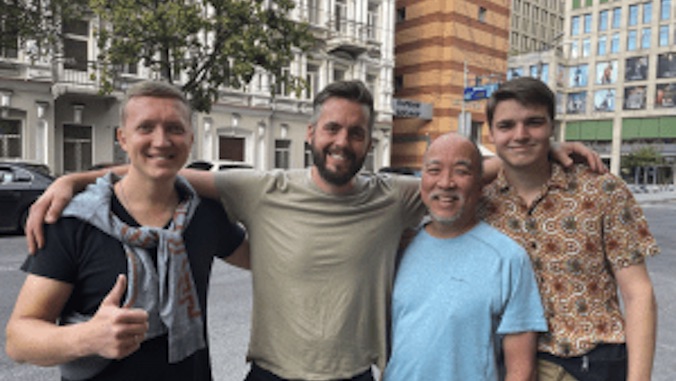 Andy Oishi is known for bringing its gift of healing to war-torn countries and disaster-stricken areas. He has been a physician for 26 years at Kuakini Medical Center and Queen’s Medical Center, and is an Assistant Professor of Surgery at the University of Hawaii in Manoa John A. Burns School of Medicine (JABOM).

Oishi, a JABOM former student, participated in humanitarian missions as part of Samaritan’s Purse, an organization that helps injured people around the world. He provided surgical care during the 2017 Battle of Mosul in Iraq and treated patients when Haiti was hit by a 7.2 magnitude earthquake in 2021. As part of the response team in the event of an organizational disaster (DART), Oishi helps respond to crises and helps victims of war, natural disasters, disease and famine.

His last posting took him to Ukraine in June to provide medical aid to war-affected people, which required Oishi to be deployed for a month.

During his travels to his main mission, including a 22-hour flight and a 24-hour bus ride, Oishi faced another obstacle.

“It was fifteen hours into the bus ride that I started getting this feeling of COVID sickness,” Oishi recalled. “My first five days in Ukraine were difficult because I was in COVID isolation and trying to work, but I was in a foreign country. I didn’t know the language and couldn’t find any performer because I was considered contagious.

Once out of the COVID-19 lockdown, Oishi was ready to get to work, but soon realized the mission had changed. His mission leaders pivoted his role to distributing medical supplies instead.

“It was kind of an interesting experience because in previous DARTs I had been deployed to do trauma surgery or acute medical care,” Oishi said. “But the war in Ukraine has evolved rapidly. [The Ukranians] put in fact [up] a big fight and pushed Russia out of the central part of the country, and Ukraine became quite stable very quickly, except for the eastern and southern areas where Russia had occupied. There was a huge need for supplies for all the medical structures in the occupied areas.

By the time Oishi left Ukraine, Samaritan’s Purse had distributed 200 tons of medical supplies. Although Oishi had no knowledge of the Ukrainian language, there were translators able to communicate with the local community they worked with.

To do his job, Oishi had to develop skills he doesn’t normally use in his practice: contacting hospital administrators, writing hospital contracts, arranging and then delivering supplies to those hospitals. All these transactions were carried out in the Ukrainian language.

Danger in the war zone

Meanwhile back in HawaiiOishi’s wife, Laurie Tamalso a JABOM alumna, received this text from her husband: “Missiles are hitting the town where we are. We hide in a basement. They later discovered that at least three people had been killed and 15 injured in the attack.

Tam said, “I waited a while, then a few hours later I texted her, ‘Are you okay?’ My friends and family were hoping the reason he wasn’t responding was because he was in a basement with no wifi. And then there were hours when I didn’t hear from him.

Oishi later replied that he fell asleep in the basement, something they can now look back on and laugh at. He added that his team spent their time in the basement having deep conversations and building camaraderie.

“For me, missiles and bombs were never the biggest concern,” said Oishi, who had prepared for the worst and thought of a game plan with his wife before proceeding with the mission. “The biggest concern was not being able to complete the tasks assigned to me.”

Despite all the challenges they faced throughout this experience, the couple found peace in their faith in God during this time of separation.

Make an impact with medical knowledge

Oishi and Tam encourage their students and residents to use the medical knowledge and skills they learn at JABSOM and find ways to make a difference here and in other parts of the world.

“We live in the safest and wealthiest country in the world,” Oishi said. “We think that’s how life is, but it’s not really like that in most countries around the world. Life can be very difficult in those places.

He added, “We have all these opportunities to serve and grow our faith, and this was definitely an opportunity where our faith grew.”