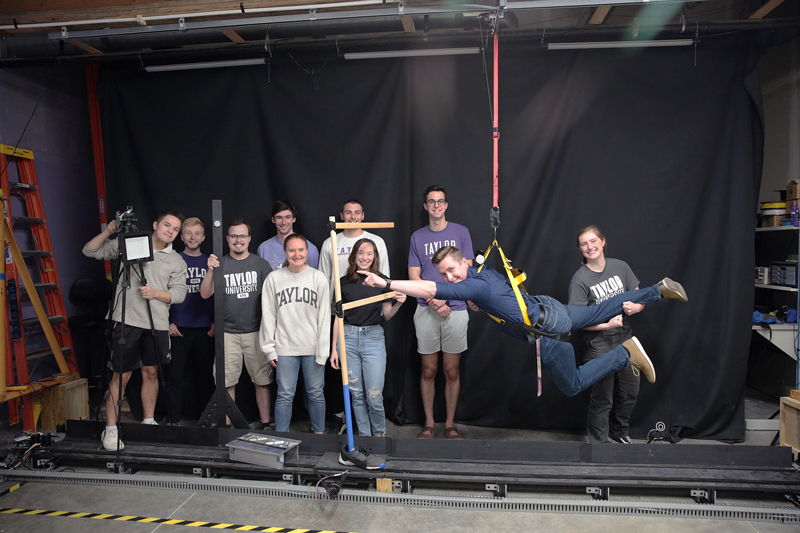 taylors Engineering Department offers countless opportunities for students to put their knowledge into practice, but one of the most important ways is through completing their junior-senior capstone project. Engineering students spend three semesters researching, designing, developing, manufacturing, and communicating on a major project. This year, this project was a complex walking interface for virtual reality.

What is Virtual Reality?

Virtual reality (VR) is a computer-simulated three-dimensional environment that can be interacted with using handheld or manipulated devices. The goal of any virtual reality system is to allow the user to feel completely immersed in the digitally simulated world, to really feel “there”. Virtual reality is used in games and a wide range of training applications, including military and occupational safety.

Virtual reality systems have been used for training purposes since the 1970s. In the 1990s, consumer products hit the market. But one problem persists in VR systems: the inability to create an experience that truly replicates natural walking and running in virtual space. Although there are several systems that allow a user to move their legs, they do not provide a natural walking feel and can cause disorientation and nausea. As a result, most systems today use “teleportation” to allow the user to move around the virtual world. In this approach, the user points to a new location in virtual space and clicks on a handheld device, and their perspective “teleports” directly to the new location.

For two years, 11 Engineering and two Computing the students worked to build a new approach to walking in virtual reality. They wanted to create a fully immersive VR system and create a deeper virtual experience, where you could walk endlessly in the virtual world without fear of walking into a wall in the real world.

The VR interface, dubbed “New Worlds”, is located in an engineering lab in the Euler Science Complex. The system is a first-generation prototype designed to prove their ideas. To reduce cost and complexity, this prototype is a simplified version of what they envision for the final system and only allows forward and backward. Turning left and right and going up and down are not possible with this prototype.

The physical interface consists of two movable footrests mounted on long rails. The footrests move quickly under the feet when the user walks or jogs. These footrests act as a walking surface for the user and switch between moving forward (to stay underfoot) and backward (to simulate the ground) when a person takes steps. The pucks roll along rails that provide smooth, low-friction motion along a single axis.

The Control subsystem transforms user tracking data into motor control commands to achieve a user experience that resembles natural walking and running. The subsystem achieves this by ensuring that the footrests always remain under the feet and that they keep the user within the physical limits of the system. In order to provide an immersive experience, the subsystem must adapt to the nuances of human movement, including positive and negative accelerations, different gaits, and gait anomalies due to mid-stride decisions.

Finally, the Security subsystem monitors other subsystems for faults or failures. In the event that a subsystem has a problem or the user begins to fall, the security subsystem shuts down New Worlds to protect the user.

New Worlds is an ambitious and exciting project that has real-world applications. But more importantly, it is an opportunity for students to learn and grow.

“The best education is one that requires the application of learned theoretical principles to a real-world problem,” said John Pugsley ’22. “We were working towards a difficult goal, applying the principles of the classroom and learning a lot more along the way.”

With so many complex and cross-functional parts, this VR project was ambitious from the start, and the students faced many problems along the way.

“It’s been hard to believe you’re so close to completing part of the project, only to realize there’s something else you missed, so there’s still work to be done,” said Kaylee Bozarth ’22. . “It happened a lot with the determination of the foot tracking calibration. There were so many little details that were problematic.

Still, the team’s tenacity and varied skills brought it together. In addition to the technical application of their engineering knowledge, teamwork taught them how to distribute work, communicate effectively, and maintain team morale in the face of challenges.

“I learned a lot about teamwork to accomplish something really cool. It was great to see how everyone’s talents could work so well together. When I was struggling with something, there was always someone I could ask for help,” Bozarth said.

In addition to the 11 engineering students working on creating the pedestrian interface with their skills in electrical, mechanical, and computer engineering, the two computer science students created a virtual world that interfaced with the system.

Because the system is limited to moving in one direction, the options for possible virtual worlds were somewhat limited. But the computer science students came up with the creative idea for a mine shaft-themed game that gets the whole system going.

“You’re in a narrow mine shaft lined with lit torches, which you can pick up and hold,” said Dr. Peter Staritz, an associate professor of engineering who oversaw the project. “At one point the tunnel opens and you cross a river of lava on a narrow bridge. Then you lift some rocks to get out of the cave.

Using virtual reality for games is fun, but the team sees uses for this system that go far beyond entertainment. Staritz wants to see this technology used to help train soldiers to clear buildings of enemy combatants.

“Cleaning buildings is one of the most dangerous jobs in the military and one of the most difficult to train,” Staritz said. “It is also difficult to reproduce this very stressful environment in real life. Eventually, we would like to adapt the footrests and rails to allow for more complex movements that would make this type of training possible.

Bozarth will begin graduate school next year, aiming to become an engineering professor herself and guide students through other groundbreaking engineering projects. Teagan Heinger, who was also part of the student team, plans to use his engineering background to solve problems in the construction industry.

“Every step of this project, from design to testing to machining, was a blast. My favorite part was the 3D CAD (computer aided design) design that I worked on from start to finish,” he said.

Turn your engineering passion into reality

The engineering team would like to especially thank the Women’s Giving Circle who has funded this work for the past two years.