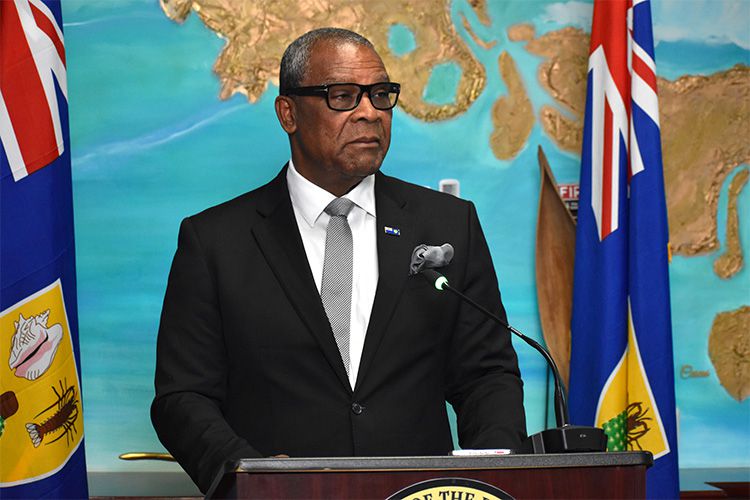 By Sheryl L. Baker Last updated Nov 8, 2022
Share
Prime Minister the Hon. Charles Washington Misick said the e-government system in the Turks and Caicos Islands is disappointing and has not progressed as he would like.

The prime minister said he had a meeting with the department responsible for e-government and “they promised to take care of this”.

During a ‘Financially Speaking’ radio program with host Drexwell Seymour on Tuesday October 25, 2022, the Prime Minister said: ‘I would suggest again that you bring in some of the people who interact directly and some of whose responsibility it is to between them things on Radio Turks and Caicos and let them explain to the audience why some of these deliverables aren’t happening. I’m a decision maker and I’m absolutely frustrated with how quickly some of the deliverables are happening.

Asked to provide an update on the status of receiving police records, Misick said he was embarrassed by it, but his government was working hard to fix it.

“It is extremely embarrassing as the Prime Minister of this country to have to answer this question and it should never be the case. I don’t want to point fingers at this moment, but it is something I have had a thorough conversation last friday as there should be no excuse why we can’t turn over a criminal record in a limited amount of time and i would say max…we should aim for 48 hours it should never take more than a week at the very beginning to get a criminal record I’m embarrassed about that we’re working hard to fix it but I think it’s time the public started calling some of the people who are in charge of delivering and working about these things,” said Premier Misick.

Meanwhile, Misick said he thinks TCI is in a situation where the motivation is for a paycheck and not necessarily always getting the job done.

He added: “It’s a tough statement to make, but I don’t know how else I could explain it. It’s also about giving people the tools, and one of the promises I made was that we were going to put in place an e-governance system and we are working hard to achieve that part of what needs to happen is to have a unique identifier or a national identity card and we are currently in the process of getting that service , because once you have a national ID and you have a good system, once it enters the system you don’t need to have a NIB, NHIP… you have an identification and with the electronic governance platform, all the machines are now starting to talk to each other.

Misick revealed that next week or two people from the UK will be in the country to help with digital government in TCI.

“I think from November 11, in the next week or two, we will have people on the ground because we have engaged with digital government in the UK to help us with digital government. Starting with government functions first, then we hope to extend it to the whole economy. I can appreciate the public’s frustrations and I can promise you I’m doing everything we can and it’s frustrating for me just as it’s frustrating for the public,” he said.