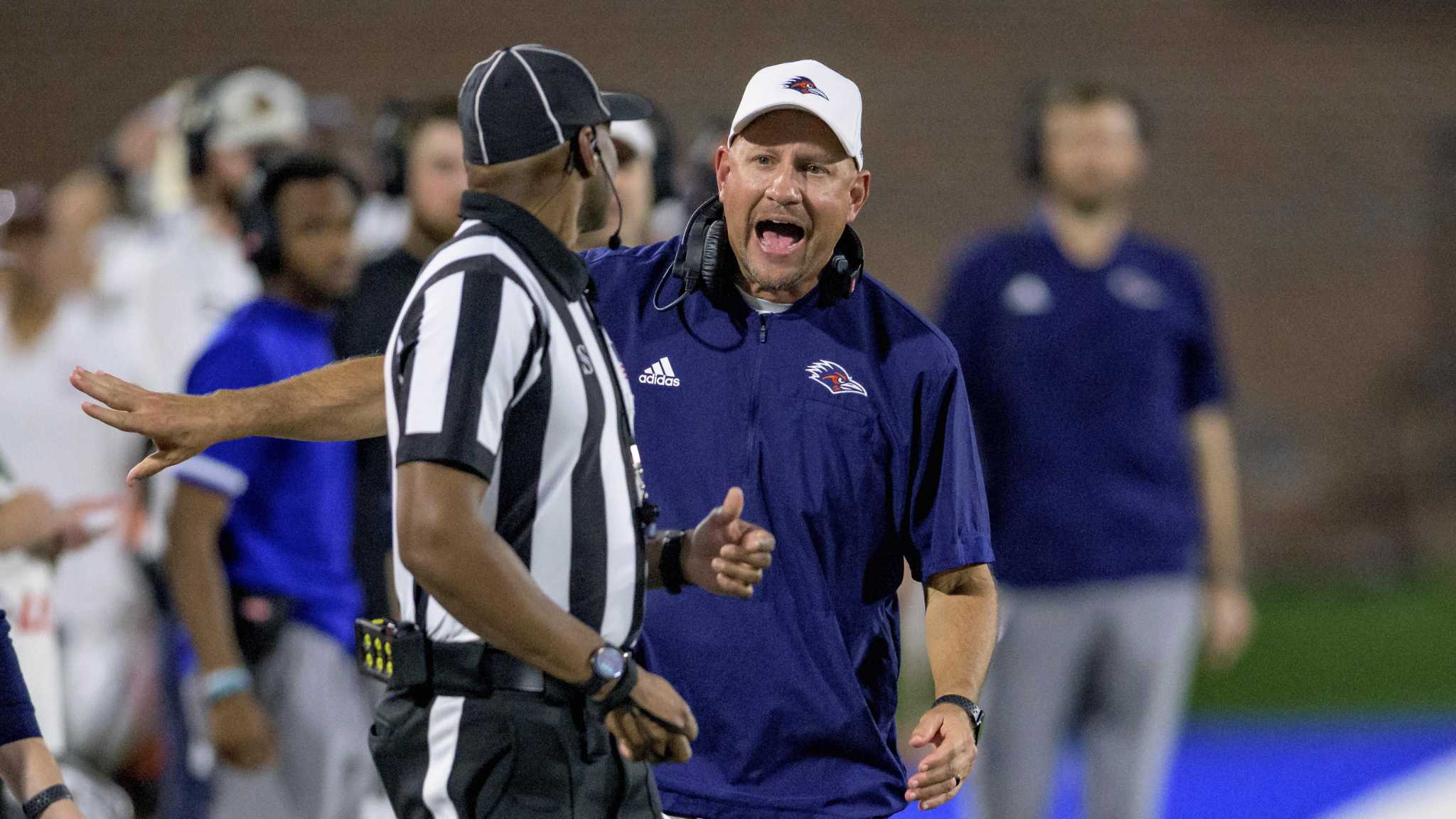 Damaged by rankings, UTSA can blame the system

EL PASO – Jeff Traylor likes to say that the UTSA triangle travels. His indignation too.

The two made it to the Sun Bowl on Saturday night, as the Roadrunners hoped to show off in front of a national crowd like they had never done before. They brought their â€œtriangle of resistance,â€ the ubiquitous mantra and symbol of the Traylor team, as well as a truck full of stinging feelings.

Four nights earlier, the arrogant committee tasked with compiling college football playoff standings delivered a message to the Roadrunners. Their undefeated record, while impressive, didn’t make them worthy of either a playoff consideration, a Top 25 spot, or even a proper pronunciation of the school name.

And how the Roadrunners ranted about their confrontation with injustice, just like the ones in Cincinnati raged at theirs? They both remembered an important point.

They weren’t wrong on Tuesday. The snob is built into the system.

The truth is, the playoffs work exactly as they were designed to be, which is another way of saying that more than half of the schools in the highest subdivision in the NCAA have no chance of making it. The only reason the playoffs exist in the first place is because money eventually got too appealing for the Big Five to ignore. And they never intended to let the upstarts of the American Athletic Conference or the Conference USA take advantage of the windfall.

So, of course, the committee was going to find reasons to keep Cincinnati undefeated out of the top four, regardless of the specious justification. And of course, he wasn’t going to feel any obligation to pretend he didn’t know anything about UTSA, which is so far off the committee’s radar that it might as well be a professional tennis association.

So when committee chairman Gary Barta called the school a â€œUSTAâ€ when asked to let the Roadrunners out of the standings on Tuesday night, it provided Traylor with a fun element for memes, but it was not so surprising. AAC commissioner Mike Aresco was not wrong when he pointed out that the committee’s “indefensible” ranking proves the playoffs are “a (Power) Five by invitation.”

Cincinnati is not in that group, and even a perfect record, including a win over Notre Dame, won’t change that. And even when UTSA goes American, so will the Roadrunners. The best they could hope for is an extension of the playoffs to eight or 12 teams, in which they would find themselves battling all the other schools in the Group of Five for a spot, at most.

These truths can be hard to accept, but they are truths nonetheless, and they are totally resistant to even the most reasoned arguments about what a team with the UTSA resume might deserve.

Of course, it could have been argued on Tuesday that the Roadrunners had clearly done more to earn a ranking than a team like Mississippi State, which lost to a Memphis team beaten by UTSA. And of course, it could have been argued Tuesday that the Roadrunners belonged to a mediocre Minnesota team that had already suffered two losses – and that was before the Golden Gophers were embarrassed by Illinois on Saturday.

You may remember that UTSA beat Illinois.

The committee may or may not remember it, but it does not care.

It doesn’t matter because the not-so-well-kept secret is that most CFP rankings are useless. The only real job of the committee is to pick the four teams that will advance to the playoffs at the end, and members reserve the right to change their minds and criteria until last weekend anyway.

The rest of the rankings help determine which team in the Group of Five will receive a trip to a New Years Bowl, but the committee has made it clear that it won’t be UTSA or any other team in the USA conference. (This is one way the Roadrunners’ next jump to AAC will matter.)

So even if the committee had ranked UTSA somewhere in the bottom half of the Top 25, the ranking would have been accompanied by a wink and a nod. It would have been a good number for Traylor to swing out of his triangle, but it wouldn’t have changed the program’s bowl outlook or the overall outlook at all.

When UTSA extended Traylor’s contract this week, it pledged to spend a massive amount of money, and that investment has the potential to turn the Roadrunners into one of the strongest programs outside of the Five most powerful leagues.

But unless there are massive and fundamental changes in the way the sport is run, this won’t be the last time that outrage will travel with the triangle.

And once again, UTSA will remember what other potential giant killers have learned before them:

The real snub comes even before the start of the season.