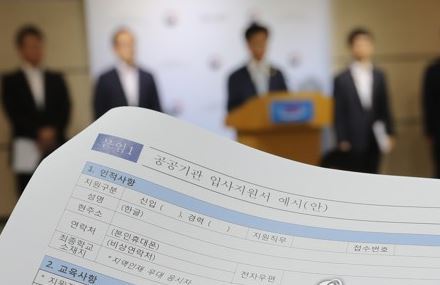 The government on Wednesday presented plans to implement a “blind” recruitment system in the public sector and extend it to private companies to ensure fair competition in the hiring process.

From this month, state-run agencies will be banned from asking job applicants to reveal personal details such as the names of schools they attended, their place of birth, family relationships. and their physical attributes in the application process. It will also be prohibited to attach photos to the application forms.

â€œThe hiring process must guarantee equal opportunities and a fair assessment. Talented people should not be excluded because of prejudices related to their university education and physical appearance, â€Vice Minister of Labor Yi Sung-ki said at a press briefing.

In the competitive job market, it is common for Korean employers to ask potential applicants about possible discriminatory factors such as age, gender, height, weight and even marital status in application forms or during interviews.

Blind recruiting means that this personal information is removed from applications so that recruiters can only consider the professional merits of applicants – skills and work experience.

The move comes about two weeks after President Moon Jae-in asked his cabinet to look for ways to introduce blind hiring in the public sector as early as the second half of this year.

The government is due to issue a detailed directive later this month, amending relevant personnel management rules and drafting a standardized resume to be used in the hiring process, he said.

The new application forms will focus on the assessment of applicants’ relevant professional experience and qualifications. Information on the physical fitness and training of applicants can only be requested in exceptional cases where the items are job related.

The government has said it will not force but encourage private companies to follow its example.

The government will distribute a manual to private companies, organize training sessions for human resources staff, and provide some 400 small and medium-sized enterprises with advice on developing application forms and interview methods to match the hiring system in the country. the blind.

According to a survey carried out by a job portal site Saramin of 427 human resources managers of private companies, 48% of them said they were ready to implement the blind recruitment system. Among them, the majority, 57.4%, said they could grant â€œequal opportunitiesâ€ to candidates.

â€œI think the blind hiring system is reasonable,â€ said Lee Hye-ri, 27, an office worker for a state bank. “I think the current hiring practice places too much emphasis on uniform assessment of applicants based on academic records and English test scores, which in my opinion has nothing to do with with their professional skills. “

But concerns remain about the effectiveness of the blind screening system.

When the system is applied in the private sector, it could have more downsides, according to a human resources manager at a Seoul-based private company.

“It’s good that candidates can be selected without prejudice,” said Seo Ji-hoon, 31. â€œBut companies have their own know-how when it comes to hiring employees. Information such as which university they attended and their specialization is helpful in selecting the right people for our business.

â€œWhen interviews are not properly structured, it is very likely that interviewers will use their subjective criteria to assess job applicants. “